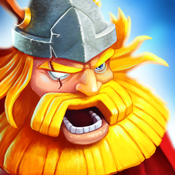 Embrace your calling and unite the world's wayward Gods under your command! Build and defend your base with the strength of all-powerful Gods like Zeus, Odin, Ra, and hundreds more! Form a guild with your allies and challenge the might of fellow players the world over in strategic combat. When the Gods of the world's ancient cultures wage war upon each other, a new God is born to unify them and restore order. Can you achieve this monumental task? Over a hundred Greek, Norse, and Egyptian Gods await your call - use their divine strength to destroy rival player bases and fortify your own. Brace yourself, for the Dawn of Gods has begun! FEATURES - Summon and collect over 150 legendary Gods and heroes straight out of Greek, Norse, and Egyptian mythology - Upgrade and evolve your Gods into increasingly powerful forms - Utilize endless base-building options to turn your base into a powerhouse - Dominate your foes in six different battle modes - Assault enemy bases with the power of the Gods to ascend the ranks in strategic PvP combat - Join an alliance with friends and support each other in battle to vanquish your rivals together - Explore the PvE world, conquer cities to earn valuable resources, and expand your empire - Save your favorite battle formations to spend less time planning and more time playing