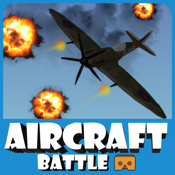 Hi everyone!
Did you ever been in plane cockpit?
Did you ever been on war?
Now you can do this both.
Have a seat and enter this insane real aircraft battle from World War II.
It's just amazing Aircraft VR World War 2 simulator effect.
You have a seat in real Spitfire fighter. Take a look at amazing battle from the first person.
Now feel like you was there, in one of the aircraft battle in second World War.
Can you destroy all Messerschmitt fighters and Heinkel bombers?
It's like Battle of England, Pearl Harbour or Midway but in virtual reality.
Need one of this to use virtual reality simulation:
- cardboard
- vr-box
2 scenes DAY and NIGHT!

This virtual reality simulator is for FREE!