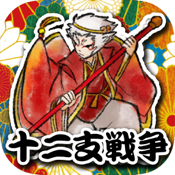 January 1, 2016
God that was tired of every day boring was suddenly said declaration.
"It is assumed that re-selected the Chinese zodiac!"
With this declaration, animals hot competition targeting the seat of the zodiac VS zodiac begins.

■ war rules
the shrine of God the new zodiac God has selected the wait in the wings, monkey is this year's zodiac is challenged by the current Chinese zodiac, which became the center, as long as you do not win in all animals, it is assumed that replacing all the Chinese zodiac frame.

[How to Play]
1: trying to attack the enemy by tapping the screen!
2: up the combat force by releasing a new zodiac!
3: up to further combat power by each character to level up!
4: it is possible to get the God force by defeating the enemy. Strong enemy has a lot of God force!
5: it is possible to give large damage Using skills! However, note that it is not used for a while and I use at once!

※ during game play, and if the app is not intended to forcibly fall, when suddenly you kill the app, because there is a possibility that the save data is not stored properly, please note.
Moreover, there Fortunately, if you can contact us at that time.