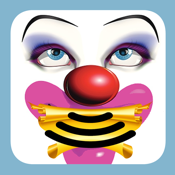 Incredibly funny bits taken from the most hilarious videos and people that used the Face Swap Live.
Never heard before in such clear detail.
The phenomena connected with laughter and that which provokes it have been carefully investigated by psychologists. They agreed the predominant characteristics are incongruity or contrast in the object and shock or emotional seizure on the part of the subject. It has also been held that the feeling of superiority is an essential factor: thus Thomas Hobbes speaks of laughter as a "sudden glory". Modern investigators have paid much attention to the origin both of laughter and of smiling, as well as the development of the "play instinct" and its emotional expression.

George Meredith said that "One excellent test of the civilization of a country ... I take to be the flourishing of the Comic idea and Comedy; and the test of true Comedy is that it shall awaken thoughtful laughter." Laughter is said to be the cure to being sick. Studies show that people who laugh more often get sick less.

American literary theorist Kenneth Burke writes that the “comic frame” in rhetoric is “neither wholly euphemistic, nor wholly debunking—hence it provides the charitable attitude towards people that is required for purposes of persuasion and co-operation, but at the same time maintains our shrewdness concerning the simplicities of ‘cashing in.’The purpose of the comic frame is to satirize a given circumstance and promote change by doing so. The comic frame makes fun of situations and people, while simultaneously provoking thought.