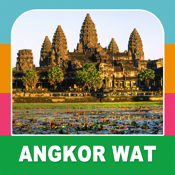 Built in the early 1100′s by the Khmer King Suryavarman II, the temples at Angkor represent one of the most advanced architectural achievements in relation to its time. The temple was originally dedicated to the Hindu god, Vishnu, but later became a site for practitioners of Buddhism. Today, the site is a major tourist location, pulling in upwards of 600,000 foreigners every year. Efforts to preserve and restore the temple have been ongoing since the 1980’s and various countries have made efforts to protect the site including, the U.S., France, Germany, and Japan.

4. Map - Interactive Map of Angkor Wat. Search for places and addresses in Angkor Wat. Get live traffic reports and alerts. Get driving directions to any location from Angkor Wat.