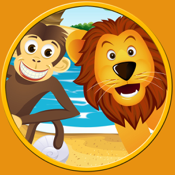 first game:
In this game your child drives a bowling ball. The goal is to pick up bowling without ever touching the edges of the track. This is both a game of skill and speed. Playable with one or two players. At each level past your child wins a picture of animal in the jungle.

second game:
In this game, different objects appear on a treadmill. To win you must remove unnecessary objects. Only the requested objects should fall into the basket at the end of the treadmill. At each level past your child wins a picture of animal in the jungle.