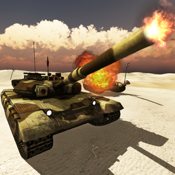 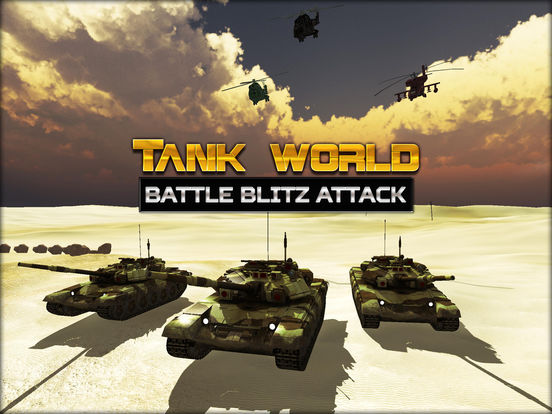 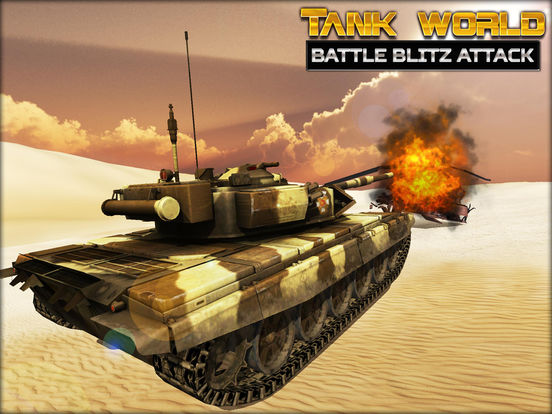 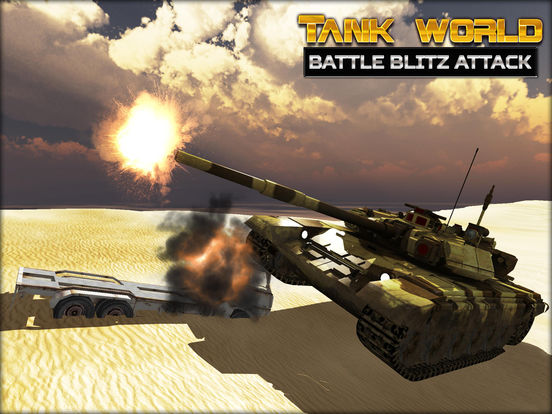 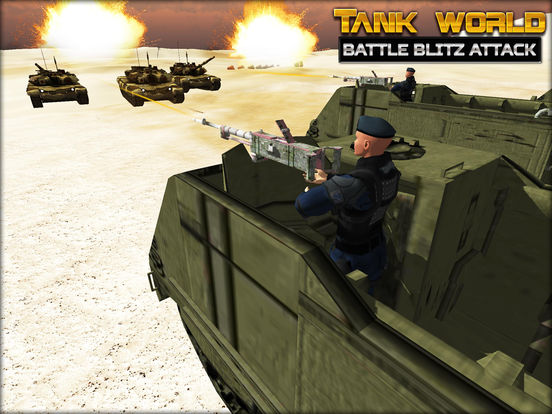 Ready to cause some havoc in the battlefield with some ultimate tank battle. Tank World Battle Blitz Attack is here to give the menace to the enemies. Fight for your honor in epic tank battle and explode all your enemies, join your tank brigade and battalion take on legions of commanders. Jump into a tank and go straight into battle of powerful Legions and become a force to be reckoned with.

Navigate through the vast lands and deserts in the battle zone with advanced controls of the most deadly world of tank battle and blitz attack including swipe aiming of the tank turret, detection radars & scope with enemy tagging. Play through 5 intense levels of real tank battle, gunning down enemy tanks, soldiers with tank attack & bombs.

The great 1990s panzer Tank in World Battle and deadly Blitz Attack is all setup with modern combat and frontline battlefield in greatest war of tank with tank blitz attack war simulator ready to attack within the enemy territories as huge German panzer world battle tanks are engaged behind the enemy lines, the battle of metal mayhem, power and dominance of the world to dominate the supreme land through the deadliest war of tank and world war II has just begun.

Major General Tankoo commander of the tank blitz brigade need to brief you as huge enemy panzer tanks are all over the battle arena loaded with deadly warheads, you will enjoy this realistic battlefield game of panzer tank world battle blitz attack simulator 3d. Tank world battle and blitz attack 3D is a tank simulator game where you defend your pride against the brutal enemy war tanks. The brigade of your blitz tanks are surrounded by the mountains is in a state of war.

Being ex-military men who led an army in the world war against hundreds of enemy soldiers, tanks, gunship helicopters and gunner trucks. It’s time to show your skills in the battlefield against army tanks. The last resort of the survival mission is you in world war of tank defense. Tank world battle and blitz attack 3D Simulator gives you a vengeful excitement, as you engage in a blitz with an apache attack on an iron panzer tank.

Your task is to win the war of tanks with an iron force and fury in this tank simulator. Tank world battle and blitz attack 3D War Simulator gives you your ideal gunship helicopter war machine in a world of tanks, but the war of tanks will test out your skills to the limit as you are clearly outnumbered by every tank hero.

Play your role as an army commander and defend your military bases. Use supreme strategy with heavy artillery blitz in Tank World Battle Blitz Attack 3D game. Drive the huge iron monster panzer war tanks and start the bombardment and bombing on enemy trucks, helicopter, drones, jeeps and military vehicles. Code Red! Your troops are under heavy bombardment; engage in brutal tank war to show extreme tanks driving and bombing skills. Rise as a hero that your nation needs.

Take the charge of the tank controls and simulate your panzer gunner tank into the battlefield with intense combat, survive against the legendary world war 2 armory like T-34, Tiger, Sherman, simulate into modern war fare like Merkava, Panzer, Tagil and mighty M1A2 Abrams, engage into the war of tanks from all around the world. Take control of this highly rugged and tough War Machine, engage yourself into the battlefield, set an armed formation and take your enemy at all Strike With Might.