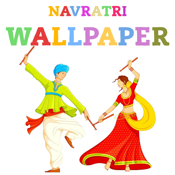 Celebrate your Navratri Wallpaper 2016 with Navratri Wallpaper 2016 Collections.
Navratri is biggest and longest music festival from all over India and it continuous for 10 days.
This festival is one of the biggest of the country that not only brings its people together, but the event also symbolizes the national integrity and unity.
In this app Old Gujarati Garba songs, Bollywood Dandiya hits and new Gujarati Garba songs are included which is favorite in all generation.
hit songs with Music Player Available in this App.


At the beginning of the festival you will need Mataji Aarti and we have given it in this app, you can play it offline and also there is lyrics of the Aarti.
Then this app also have offline Stuti with lyrics in Gujarati, English and hindi.
Songs typically revolve around the subjects of Lord Amba or the nine goddesses.
Lots of and very latest collection of the Gujarati Garaba, Dandiya, 3 Taali and Dodhiya.
In this app there is also gallery of lord ambe maa, umiya maa, kalika maa.

you can use this app in navratri, Vijaya Dashami and Sharad Poonam to play Gujarati Garba in flats and everywhere using stereo surround system. it has high quality songs collection to play. This is the Best of 2016 Navratri Aarti, Stuti and Gujarati Garba application which includes best audio Quality.
Durga is the principal form of the Mother Goddess in Hinduism. There are many incarnations of Goddess Durga: Kali, Bhagvati, Bhavani, Ambika, Lalita, Gauri, Kandalini, Java, Rajeswari, and has nine appellations: Skandamata, Kushmanda, Shailaputri, Kaalratri, Brahmacharini, Maha Gauri, Katyayani, Chandraghanta and Siddhidatri.

Please rate us you like our app and our collection of Wallpaper and lord mata's photos.
If you have and queries or want to suggest something please let us know at jigneshanghan119@gmail.com.
Enjoy The Festival and very Happy Navratri Wallpaper 2016 in Advance.
Enjoy this Navratri Season with our application.