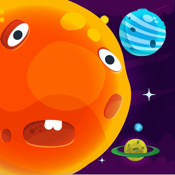 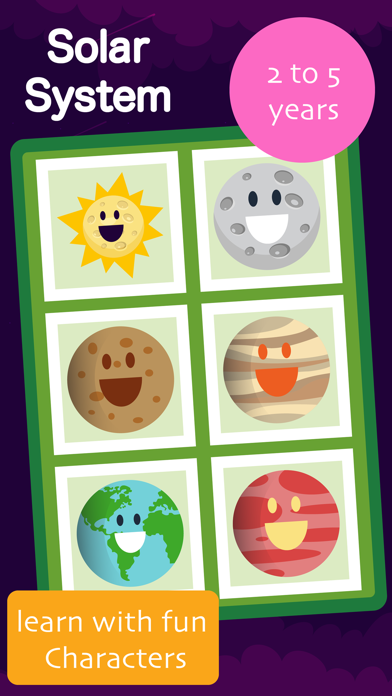 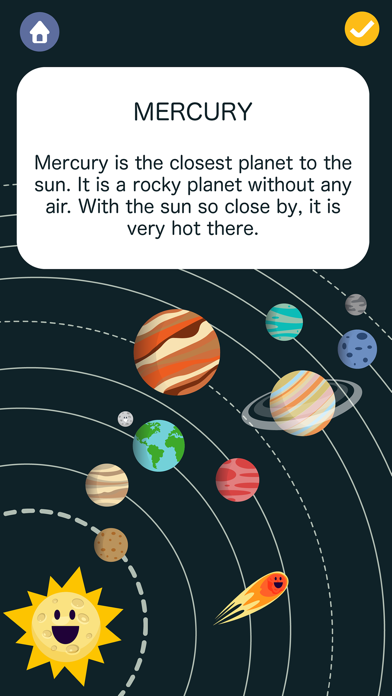 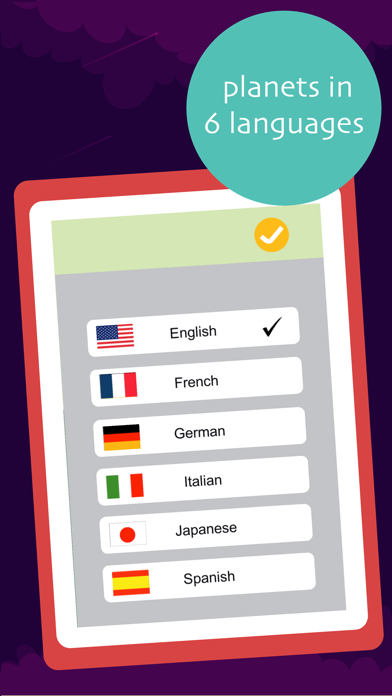 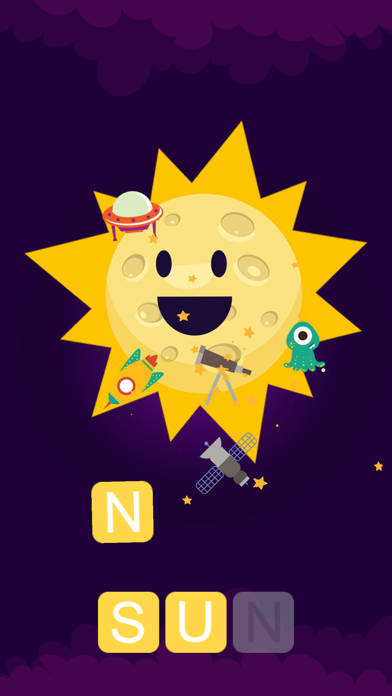 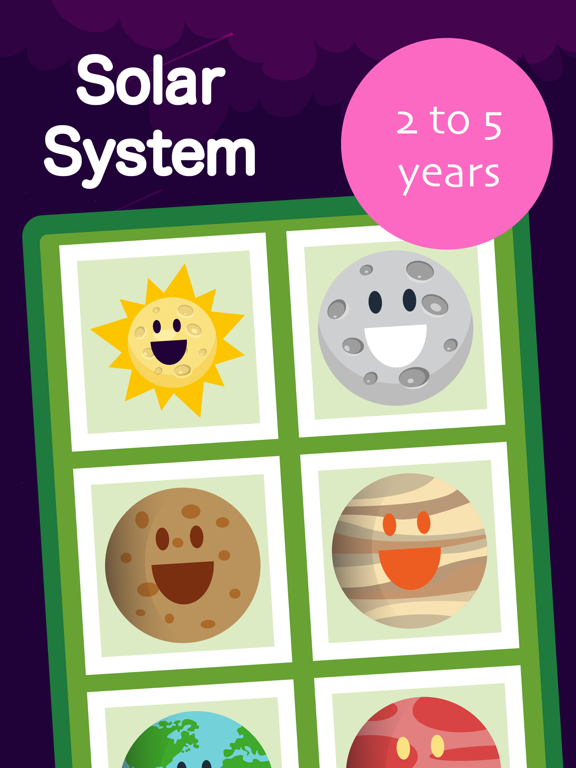 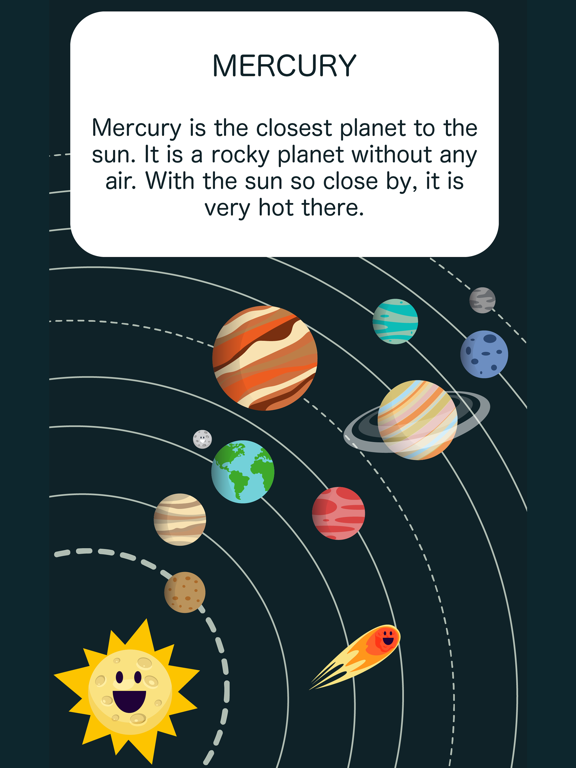 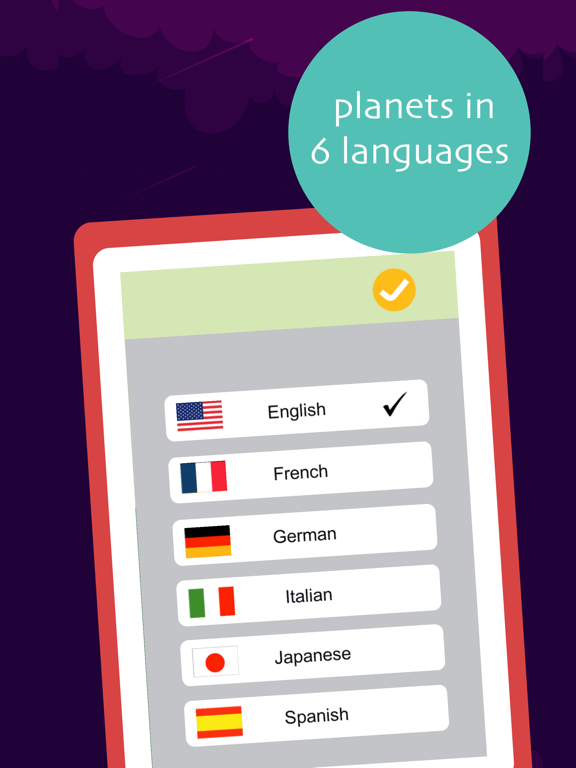 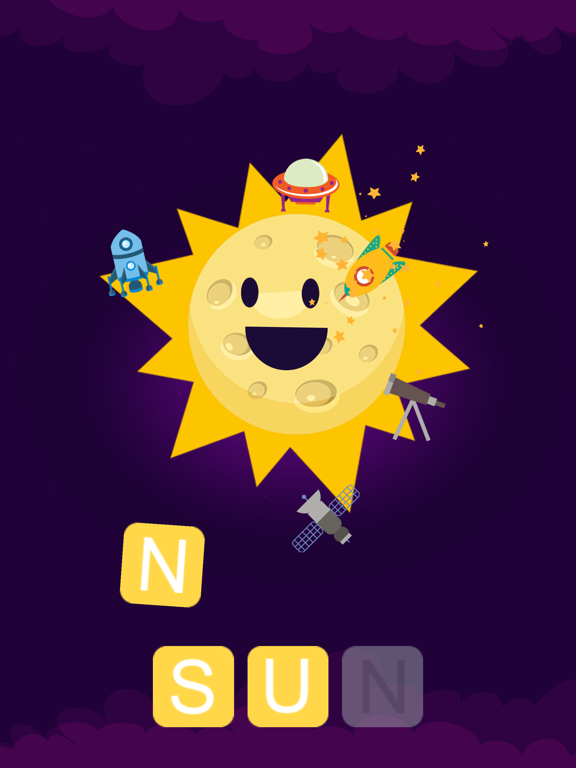 Solar System for Kids - Learn Solar System Planets is an educational application for your kids to learn English effectively. It will introduce the amazing Solar System of our universe to your kid or kids, with the educational process being funny and excessively interesting. With no effort, toddlers will learn to recognize the planets with their names, and how to spell and learn the alphabets with sounds for kids in English Language and French, German, Italian, Japanese and Spanish.

Kids can learn English Alphabet and learn their English name of the solar system planets with sounds. English is a very important language for kids development. Learning is best while playing with fun making it the most effective way for your kids to learn basic English easy. Let your kids learn and play now!

Solar System for Kids - Learn Solar System Planets also includes many other languages other than English. Every Language including English Letters have their sounds and teaches the kids how to spell the words and play it as a game.

Kids are intelligent to learn spelling of words.

Advantages of the Game:
- The game will easily teach your child planets. The planets are illustrated in such a way that they take interest in learning and interacting with them.

- The planets are named in six (6) languages: English, French, German, Italian, Japanese and Spanish. This allows the kid to learn over 30 foreign words, which will be very useful for the further study of the languages. Each word is pronounced clearly and distinctly along with how to spell them.

-Your child will get to form the planets by playing a puzzle game. This enables them to improve their cognitive skills along with improvement to their problem solving skills.

- Each planet comes with real sound effects whereby your kid will be able stay focused and entertained. The learning, which engages more senses, will make the development of their brain ever faster.

- A fascinating outer space like environment is set up by introducing spacecraft’s and many more around the planets letting your child to interact with the planet. The funny squeaking sounds along with the giggles made by the planets with their sounds brighten up the game to keep your child encouraged to learn.

- Your child is taught how to form words in English Alphabet and many other languages by reading out letters one by one. When the name of the planet is formed they are spelt and read for your child with sound.

- After you open you will be shown a menu with several planets. Let your child click any planet of choice.

- Learn how to recognize shapes and form the planets by playing the puzzle game. Drag each puzzle piece to its right place. This will let your kid learn to match.

- Once your child is satisfied it will take you to start forming the planet’s name, by showing letter-by-letter and reading out the letters.

- As the child improves you can turn off the hint and increase the speed.

Small kids often have troubles identifying and naming planets. The game allows the pre-schooler to learn their planets. The best way to help them remember the new information is through playing games and using the interactive planets.

We have crafted the Toddlers Solar system application in such a way that interacting with devices can be positive experience. Introduce your child for a very early learning experience. Make your child to be at the forefront of what the world has to offer them.