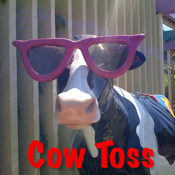 The Cow Toss app and the source code is for Sale on Apptopia. Now you can own and sell the most stupidest ever written.

Cow Tossing at it's best. Toss the cow and watch it fly off into 3D space. Score. Repeat.

The most stupid app ever written for the iPhone.

Check it out for the mac at:
http://digitalthoughtsoftware.com/cowtoss/Home.html

* According to this comic strip, "Cow Toss" will cause the mobile phones to take over the world, destroy civilization and earn Obama a Nobel Peace prize...

* Search "Cow Toss", it been written up in a lot of newspapers.

* www.news.com rated it as the 4th stupidest application for the iPhone.

* Ted Turner's Network rated it as the 8th most stupidest application for the iPhone.

* Anybody at South Park Productions or The Big Bang Theory wants to do an episode base on Cow Toss let me now...

According to a popular comic strip-- Cow Toss: When mobile phone become sentient and wants a reason to destroy civilization there's an app for that...