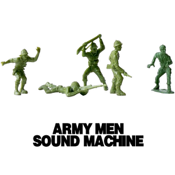 For those of you who want to hear military sound effects coming from your iPhone or iPod Touch - Army Men Sound Machine is for you. Growing up I remember playing with my little Army Men and making all of the sounds myself!

Buttons can be played one at a time or simultaneously so that you could make it sound like a very large battle.

I have gotten emails from around the globe from parents regarding how their kids loved the Animals Sound Machine. Army Men Sound Machine continues this series of sound effects apps.

COOL TIP: SOUND EFFECTS CAN BE USED WHEN YOU ARE ON THE PHONE
Thanks to Lightbrazer for sharing with us how he uses the sound machine series of apps. Put your call on speakerphone then hit the home button to load one of the sound machine apps. The sounds play through the speaker and get picked up by the microphone. You can easily add sound effects to your phone calls!!!