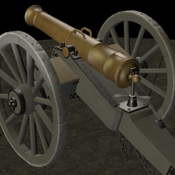 Dukes' War is a classic napoleonic wargame, allowing you to control your duchy's forces of infantry, cavalry and artillery and try to solve, once and for all, those nasty border arguments with your neighbor!

But if you take too long, someone might show up and intervene in your little local war...

You win the war by conquering your enemy's capital.

To attack a unit, just move into their position BUT what you see might not be the complete information... if there is more than one unit in the same location, the strongest one will defend first. A unit that loses a fight will try to retreat and the winning unit will advance (except if it is artillery).

Infantry units are good at defense, the other ones good at attack. Careful: cavalry units are bad attacking a city... you might need artillery to conquer a capital.

You have both replacements to replenish units that have suffered casualties (automatically done, based on the territory you control) and recruitment points to buy new units.

It uses NATO symbols for the units: 1 dot is artillery, 1 line is cavalry and 2 crossed lines is infantry.
Map: you control the territory and forces marked with an 'N' (North Duchy).
How to win: capture your enemy's capital. You also get victory points by conquering territory and destroying enemy units.
Move and Combat: in the movement tab, you select the unit you want to move; moving to an enemy ('S') square with enemy units will cause a combat.
Recruit New Units: you receive 1 recruitment point each turn; in the recruitment tab you can use it plus accumulated points to recruit new units - it will only display those you can afford.
End Turn: you can end the turn in the Game tab. All the movement points are reset.
Note: several units can be stacked in the same position and they can be hidden in the map view! Happy Fighting!";