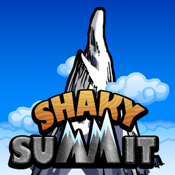 Rolling boulders, slippery ice patches, cave floods and volcanic fire storms hail down on you as you climb the 3D race to the Shaky Summit. Touch the Stamina Bar for a short burst of speed or faster recovery and shake the mountain to reach the peak before your opponent.

Strategize your climb accordingly so you don’t accidentally help your opponent through the debris of Summit Island. With ten challenging climbs, fortuitous path hurdles and a multi-player mode, IUGO has created a title loaded with hours of game play fun.

Decorate your character with gold, silver and bronze medals for each level of difficulty while jamming to your own playlist and collecting un-lockables.

Shaky Summit is the essence of light gaming exclusively tailored for the iPhone.

"It's an interesting and inventive approach...Shaky Summit really does well in what it offers. The simplicity of its gameplay makes it ideal for portable play and its wealth of content ensures a great value."

Sign up to our twitter feed for giveaways and the latest info on all IUGO
games!
http://www.twitter.com/IUGOME