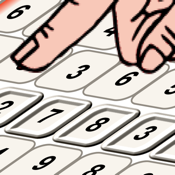 Slide Sudoku ™ is the classic Sudoku game adapted to the touch interface. In landscape mode, the user is presented with rows of numbered tiles. These rows can be slid back and forth or dragged up and down until the resulting number grid meets the requirements of Sudoku—the digits 1-9 must appear only once per row, once per column, and once per 3x3 region.

As in classic Sudoku, certain numbers are fixed in order to give a starting point for puzzle solution. In the case of Slide Sudoku ™, the puzzle starts with the first row fixed horizontally. Two types of notations are supported to facilitate the logical narrowing of possibilities that leads to a solution. The first is a red edge on the left most square in the row achieved by double tapping the row. This serves as a user note that the current horizontal position of the row cannot be part of the solution. For instance, if a sliding row repeats a digit in the same column as the initial fixed row, this row position can be eliminated for the sliding row. The red edge serves as a visual reminder of the remaining possible configurations. When all but one possible location for a row have been eliminated, a triple tap can be used to fix the row horizontally. The fixed horizontal position is indicated by the tiles having a pressed down look. Either notation can be undone by repeating the action on the row. The result is an intuitive logic game that is a joy to play.

In portrait mode the numbers rotate and the sliding rows become sliding columns, so if you’re out of ideas in one orientation or maybe you’ve just gotten too good, go ahead and give yourself another perspective by rotating the game.