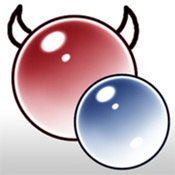 Thousands upon thousands of people have made Theseus one of the top selling puzzle games in the app store. Be the next to discover it!

Be sure to also check out Theseus HD for the iPad. The same game you love for the iPhone but with a fantastic new graphics engine and more levels!

"With a set of superb levels and the kind of gameplay that can entice you for either hourly marathons or quick-minute fixes, Theseus is easily one of the best puzzlers available on the iPhone, and that's no myth." --Pocketgamer: 9/10 Gold Award

Reviews from the App Store:

* "This may be the best game I have purchased so far."

* "This app is one of the few gems around the app store."

* "Challenging, highly addictive, but also easy to take out and play in small chunks of time, this is the perfect mobile app game."

* "The game is extremely awesome and fun to play. Unlike many other games this was actually worth the money I had paid to obtain it."

Based on an original concept from puzzle-master Robert Abbott, Theseus is a refreshing twist on the traditional maze. As Theseus, you must reach the exit of the labyrinth while avoiding the terrible Minotaur. The Minotaur takes two steps for every one of yours, but follows a strict set of rules that you can use to outsmart him.

The Theseus game engine provides complete control over move history, allowing you to undo all moves. You'll need it, since outmaneuvering the Minotaur can be quite a difficult task. Each level will reward you with that "Ah-hah!" moment when you discover the trick to trapping the Minotaur in the various nooks and crannies of the maze.

This package provides over 85 levels of increasing difficulty. Can you conquer them all? Only the most experienced navigators have been able to solve the final set.

Search Youtube for "Theseus iPhone" to watch a video tutorial.

Features:
* Over 85 Levels of increasingly difficult layouts
* Complete and unlimited undo of move history - including "smart undo"
* Automatically restores your current puzzle if the game is interrupted
* Gesture control system allows you to swipe or tap on the map in the direction you want to move.
* Level completion state is saved - can you solve them all?

This application is developed in full cooperation with Robert Abbott from http://www.logicmazes.com

Some people may know this game as Mummy Maze, but did you know that Mummy Maze was developed as a knockoff of the original Theseus?