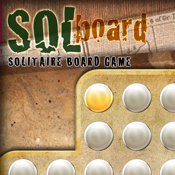 Solboard also known as Peg Solitaire is an addictive mind game, a puzzle, a brain teaser, invented in the 17th Century. The game appears to be deceptively simple, but it is not.

It appears simple, but it is not. You will put your brain to test!

According to the legend, Solitaire was invented by a French aristocrat in the 17th Century, when incarcerated in the Bastille, explaining the game's less common name Solo Noble, but no evidence was ever found to support this story. The first evidence of the game can be traced back to the court of Louis XIV, and the specific date of 1697. Several works of art from that time show peg solitaire boards, demonstrating that the game was highly fashionable.

This game is known simply as Solitaire in the United Kingdom.

FEATURES
- number of boards: 2 (English and French)
- starting the game: hole in the center, hole in the middle, holes in all corners and cross style
- unlimited levels of undo
- tips: shows you a valid movement
- screaming light and fast
- Breathtaking design of boards and pegs.

There are two traditional boards, the English, with 33 positions and the French with 37 positions. Solboard comes with these two variations and offer several ways to start the game.

So, what are you waiting for? Enjoy the Solitaire Board Game! It is a game for all ages or for those who want to exercise the brain.

"...There are a ton of these peg solitaire games out there. This one is kind of light, with only two boards to choose from. The interface and graphics are what set this title apart. If you like what you see, give it a try...." by pct1818