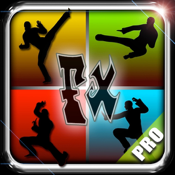 "Sound" like a martial arts master, with the all new KungFu FX generator! Hhhhiiiiiii.... yaaaaaaarrrrrrrrrr!

KungFu FX is not a game, but a way of fast-tracking yourself as a pretend Hong Kong sound FX foley* artist, in the comfort of your own home, on the street or at the office.

Have fun with the awesome KungFu FX on your own... but have even more fun using it with your friends. While they bust some of their best Kung Fu moves on each other, you take control of the KungFu FX and play real-time sound effects in sync with what you see. Highly addictive fun as you & your friends KungFu showdown to true Hollywood style audio FX.

For full effect, we recommend you plug KungFu FX into your stereo and play LOUD. Wicked!

* This app is intended for personal, entertainment use only.