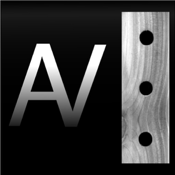 uFlute creates emotion-filled music evocative of Nature and the outdoors. Try playing your uFlute wherever you go - especially in a canyon (or a stairwell!), outdoors, and even in a hotel room - and feel the music blend with nature.

uFlute is the perfect companion to 'miniSynth', 'Harmonica', 'Ocarina', and 'Leaf Trombone' for serious fun and education at the same time.

Enjoy uFlute and have fun!

2. For a really fine flute performance or recording session, put your iPhone in airplane mode with WiFi turned off, so that processing of incoming E-mail or phone calls will not disturb your flute performance.