Jetset: A Game for Airports 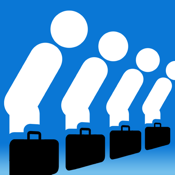 "It was always smart social parody from the start, but in making it this much smarter, Jetset has quickly earned its wings in the top tier of App Store output."
-- Boing Boing Offworld

"Jetset is fun, innovative and beautiful game. Game’s limitations to awards, ie only being able to win souvenirs at physical locations adds a new and creative twist to gaming on the iPhone."
-- Creative Applications

"...a pretty good way to pass the time if you are unfortunate enough to be catching a plane"
-- Pocket Gamer

"gets you thinking about current events..."
-- Technologizer

"It is hard not to laugh but laughing is not a safe option: JetSet gets furious and soon."
-- TouchMyApps

A game for the frazzled globetrotter in all of us.

Jetset is a game about air travel with a satirical twist. It is the first game of its kind, a mobile game for business travelers.

The challenges of today's airport security make business and pleasure travel increasingly difficult. Security is there to make you feel safe and get you to your plane in one piece. However, today's regulations change frequently and are often different from airport to airport. Now, you too can stand in the shoes of a security agent trying to avert terrorism while getting everyone through a checkpoint quickly. This is a game that's just as fun as waiting in line -- and one you can play in line as well.

Even better, when you play in one of the 100 world airports included in the game (from Albuquerque to Waco), you can win custom-made, collectable, digital souvenirs from each one. No longer will you be guilted into buying an overpriced gift for friends and family you leave behind, now you can gift items of sentimental value collected through your real travel plans. Or if you're more of the hoarding type, you can trade in your souvenirs for exclusive Jetset travel accessories.

- Play 100 different airports from around the world and earn unique location-based souvenirs
- Strip search travelers for fun
- Confiscate dangerous travel items like pressurized cheese
- Game automatically selects the airport you are in or near based on available location services*
- Collect and play with souvenirs in your personal snowglobe, or share them with friends on Facebook*
- Facebook gifts you give can be downloaded by your friends into the iPhone/iPod Touch Snowglobe App (sold separately)
- Unlock silver, gold, and platinum souvenirs based on your performance -- just like your favorite airline loyalty program
- Are you a real jet setter? Redeem collections of souvenirs from different airports for exclusive Jetset travel trophies*
- Highscore lists: local, global, and by airport

A number of players have complained, both in App Store reviews and in emails to us, that sometimes prohibitions can change just as the player is tapping the Proceed button.

This behavior is intentional. It was meant to highlight the arbitrary nature of current security policy.

That said, we acknowledge that some players might find this behavior frustrating. This update (v 1.2) of Jetset adds a program setting "Unreasonable Fairness." When turned on, the game will delay rule changes if they are scheduled to occur too soon after the player taps Proceed to allow a passenger through.

To turn on Unreasonable Fairness, go to the main iPhone Settings app, scroll down to the Jetset section, and flip the toggle switch to ON.

Note that other timing adjustments have been made to games played when Unreasonable Fairness is on, in an attempt to ensure parity among highscores.