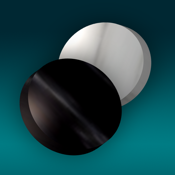 Merelles is a classic strategy game that has been played in various forms for two thousand years. Now this classic game is brought up to date so that you can play it on your iPhone / iPod Touch, either against the computer or against another person.

- One or two player mode
- 4, 6, 9 and 12 men versions of the game
- 3 levels of difficulty per game
- Cool animated graphics and effects
- Hi-resolution graphics for the iPhone 4 retina display
- Sound effects
- 'Stones on wood' and 'floating in space' themes
- Undo / redo
- Scoreboard
- Auto-save game in progress
- Can listen to your iPod whilst playing

The 4 men game is also known as 4 Men's Morris and Achi.

The 6 men game is also known as 6 Men's Morris and was popular during the middle ages in England, France and Italy.

The 9 men game is also known as 9 Men's Morris, Mills and Merrills, and is arguably the most popular version. It emerged from the Roman Empire and peaked in popularity in medieval England. It is still played by many today.

The 12 men game is also known as 12 Men's Morris and Morabaraba and has been played for thousands of years across Africa. It is still very popular. This is the most challenging version of the game.