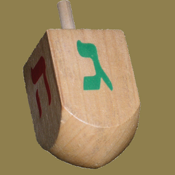 JUST IN TIME FOR THE HOLIDAYS.

A simple game that's been played for ages, for all ages.

A dreidel is a spinning top with four sides. It is typically played with during the Jewish holiday of Hanukkah. The game played with a dreidel is similar to Teetotum where the person spinning must spin the top and do what the resulting side tells them to do.

Play begins when each player has added their ante into the pot. Then in turn each player spins the top and then when they make it stop, they must perform the action.

The actions on the dreidel are as follows:

Play continues until one player has won all the coins.