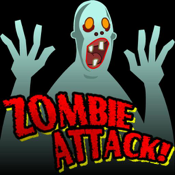 Your mission: play as a survivor from the ultimate Zombie Apocalypse, protect your shack and stay alive. Choose from an array of zombie-blasting weapons including, flame throwers and cannons. Kill zombies, earn points and cash to upgrade your weapons and bolster your fire power. Easy tilt and touch-screen controls make ZA! an instant iPhone exclusive favorite.

Superb graphics, attention to detail, and IUGO’s signature high polish makes ZA! the best value for your device. Play for a few minutes or get sucked in for hours. Either way you won’t be able to put ZA! down.

"What there hasn’t been is any real innovation in the genre as it is played on the iPhone - and this is what makes Zombie Attack! absolutely brilliant…"

Sign up to our twitter feed for giveaways and the latest info on all IUGO
games!
http://www.twitter.com/IUGOME