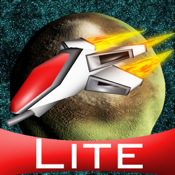 The full version of SciFly: Dogfight is on sale for $0.99

The Lite version includes 1 of 4 aircraft, 1 of 3 a planets, and 1 of 2 game modes from the full version, SciFly: Dogfight

SciFly: Dogfight is an action packed 3D aerial combat game for the iPhone and iPod Touch.

Engage with enemies fighters in both the Time Attack and Point Match battle modes. For every enemy you destroy, you will be rewarded with in-game credits. With these credits you can unlock new aircraft and upgrade their weapon and armor systems. If you do exceptionally well in a battle, you'll be rewarded with a large amount of bonus credits. There are 4 aircraft in all to unlock and upgrade.

If you collect enough credits, you can also unlock new planets to battle on While you first begin battling over the Utopia planet, you will later unlock the lava wasteland as well as an icy snow planet.

Each of the 4 aircraft are highly specialized. Each weapon system behaves in a unique way, so you will develop your own techniques to master each one. With the missile wielding Avenger, for example, you will want to approach from a distance and lock onto your target. However, with the flak-cannon wielding Gladiator, you will want to go full speed to get up close. This will allow you to blast your target away with a single well-placed shot.