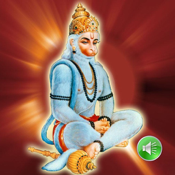 Hanuman (Sanskrit: हनुमत् Hanumat; nominative singular हनुमान् Hanumān), known also as 'Anjaneya' (son of Anjana), is one of the most popular concepts of servants of God (bhakti) (devotion to God) in Hinduism and one of the most important personalities in the Indian epic, the Ramayana. His most famous feat, as described in the Hindu epic scripture the Ramayana, was leading a monkey army to fight the demon King Ravana.

Hanuman is considered as siranjaeevi (to live eternally). He is the monkey God, strong, full of valour, with various skills and powers. At the same time, he is wise, a great gnani, yogi and a brahmaachari. He had only one thought that of serving his Lord Rama with utmost humility and devotion. He is known as Siriya Thiruvadi. He is considered to be an amsam of Lord Siva.

It has gained enormous popularity among the modern-day Hindus. Many of them recite it as a prayer every week, generally on Tuesdays or Saturdays. Hanuman is a bachelor God and many bachelors are staunch devotees of Shree Hanuman.

We devote this Hanuman Chalisa (Audio) to you all.