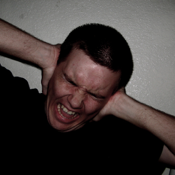 Have you ever wanted something that would simply drive your teen nuts?

Well, your prayers have been answered!

Annoy-A-Teen generates irritatingly high frequency sounds that most adults have lost their ability to hear, thereby targeting teenagers and other dumb animals. It will also annoy adults who are fortunate enough to still have a teenager's hearing.

What will you hear?

Depending on the sensitivity of your ears, you may or may not hear all of the sounds created by a compatible device, even though they are irritably perceptible to others with more sensitive ears.

Note: When using Annoy-A-Teen upside down and have the screen turn off: the "proximity sensor" is enabled to allow the device to be put in a pocket covertly. Avoid handling the area between the earpiece and the mute switch (iPhone 3G)

Research indicates that human sensitivity to higher frequencies deteriorates with age and exposure to harmful volume levels. An average healthy young person can hear sounds from 20 to 20,000 Hz (20 kHz). The normal middle-aged adult can usually hear up to 12-14 kHz, while the elderly only hear up to 8 kHz. Sensitivity to sound varies with frequency: humans are most sensitive to sounds from 1 kHz to 4 kHz. Women are typically more sensitive to higher frequencies than are men. For more information, google "human hearing range".

Annoy-A-Teen employs sounds similar to those used by mosquito ringtones and electronic repellants, dog and deer whistles as well as businesses to repel loitering teenagers.

Annoy-A-Teen requires either a built-in or external speaker.

iPhone (Original): The built-in speaker is unfortunately limited: it will generate overtones that nearly everyone can hear, exposing you as the source of their torment. Turning the volume down may decrease the noticeability of these overtones.

All iPhones and iPod Touches: Using an external speaker will work for all devices. A high quality speaker should reproduce the higher frequency sounds with better fidelity than the built-in speaker.

The makers of Annoy-A-Teen are not responsible for the resulting teenage annoyance or other behavioral repercussions.

The sounds produced by Annoy-A-Teen are simple, normal frequencies people are exposed to in everyday life (like high quality music). Although some of the sounds produced may not be perceptible or appear loud by the user, they are emitted at the same volume level as other iPhone/iPod sounds (like music). As with all audio systems, care should be exercised to avoid prolonged exposure to such loud sounds in order to prevent hearing damage, whether using an external speaker, the built-in speaker or headphones. Use Annoy-A-Teen as carefully as you would an iPod.

The makers of Annoy-A-Teen assume no responsibility for damages caused by the creation of or exposure to harmful sound levels.

IN NO CASE SHALL CJKAPPS, ITS DIRECTORS, OFFICERS, EMPLOYEES, AFFILIATES, AGENTS, CONTRACTORS, OR LICENSORS BE LIABLE FOR ANY DIRECT, INDIRECT, INCIDENTAL, PUNITIVE, SPECIAL, OR CONSEQUENTIAL DAMAGES ARISING FROM YOUR USE OF ANY OF THE PRODUCTS OR FOR ANY OTHER CLAIM RELATED IN ANY WAY TO YOUR USE OF THE PRODUCTS, INCLUDING, BUT NOT LIMITED TO, ANY ERRORS OR OMISSIONS IN ANY CONTENT, OR ANY LOSS OR DAMAGE OF ANY KIND INCURRED AS A RESULT OF THE USE OF ANY CONTENT (OR PRODUCT) POSTED, TRANSMITTED, OR OTHERWISE MADE AVAILABLE BY CJKAPPS, EVEN IF ADVISED OF THEIR POSSIBILITY. BECAUSE SOME STATES OR JURISDICTIONS DO NOT ALLOW THE EXCLUSION OR THE LIMITATION OF LIABILITY FOR CONSEQUENTIAL OR INCIDENTAL DAMAGES, IN SUCH STATES OR JURISDICTIONS, CJKAPPS' LIABILITY SHALL BE LIMITED TO THE EXTENT PERMITTED BY LAW.