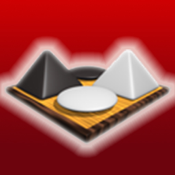 PLAY WHAT THE ROMANS PLAYED, on your iPhone/iPod Touch.
It is the year 20 BC. Emperor Augustus has brought peace to a young Roman Empire. Two friends sit upon the steps outside the amphitheatre, locked in concentration over a stone board upon which glass pieces have been placed, trying to gain an advantage over one another. They’re playing Ludas Latrunculorum, a game already hundreds of years old, which enjoys a high level of popularity within the Empire.

Now you can play what the Romans played on your iPhone/iPod Touch. Using the latest in Artificial Intelligence, we’ve recreated this ancient game for your enjoyment.

Rules:
* The initial board configuration is automatically set-up by the computer.
* Black moves first.
* Players alternate turns during which a single piece of the player's own colour is moved.
* Pieces may move horizontally or vertically any number of spaces (like Chess rooks).
* A single stone is captured if it is surrounded on two opposite sides by pieces of the opposing colour.
* The outside walls cannot be used to capture pieces.
* A stone in the corner is captured by two stones of the opposing colour placed across the corner.
* Multiple stones can be captured along a line.
* If a player moves into position to capture a line of several opposing pieces which includes the Dux, the Dux is not taken but the other pieces are.
* The Dux cannot be captured, but can be immobilized by being surrounded on all four sides.
* The first player to immobilize the enemy Dux wins.
* The Dux is immobilized if it is blocked by an enemy stone such that it has no place left to move.
* If the game stalemates, the player with the most captured enemy stones wins.
* The game ends when 30 moves are made without a capture, with the player with the most pieces remaining on the board declared the winner.