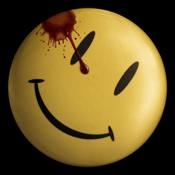 Explore the world of the Watchmen movie on your iPhone or iPod Touch. Gain access to Watchmen content including trailers, behind the scenes video journals, motion comics and downloads.

Application Features:
- Interactive Rorschach mask (NEW):
- Use the iPhone touchscreen to create unique Rorschach patterns
- View your creations in a morphing gallery that includes masks from the film
- Save and Share your creations with your friends from your photo roll
- Navigational Hub with exploration unlock – Explore Watchmen through a bank of video monitors unlocking content as you go.
- Wallpapers – Save Watchmen themed wallpapers and use as background on your device
- Behind the Scenes Video Journals – Director Zack Snyder’s Video Journals that chronicle the making of the film.
- The Making of The Watchmen My Chemical Romance Music video
- Real Time Watchmen News Feed – Stay informed about all things Watchmen
- Watchmen Motion Comic Teasers
- Official Film Trailers

About the Film:
A complex, multi-layered mystery adventure, Watchmen is set in an alternate 1985 America in which costumed superheroes are part of the fabric of everyday society, and the “Doomsday Clock” – which charts the USA’s tension with the Soviet Union – is permanently set at five minutes to midnight. When one of his former colleagues is murdered, the washed up but no less determined masked vigilante Rorschach sets out to uncover a plot to kill and discredit all past and present superheroes. As he reconnects with his former crime-fighting legion – a ragtag group of retired superheroes, only one of whom has true powers – Rorschach glimpses a wide-ranging and disturbing conspiracy with links to their shared past and catastrophic consequences for the future. Their mission is to watch over humanity…but who is watching the watchmen?

The film based on the graphic novel is being directed by Zack Snyder (300) and produced by Lawrence Gordon (Die Hard), Lloyd Levin (United 93) and Deborah Snyder (300), with Herbert W. Gains serving as executive producer.

Watchmen was originally published by DC comics as a 12-comic book series between 1986 and 1987, before subsequently being collected into a trade paperback. It is the only graphic novel to win the prestigious Hugo Award or to be named among Time magazine’s “100 Best English Language Novels from 1923 to the Present.”