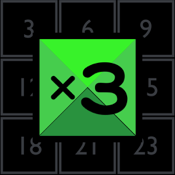 "Puzzle made a figure to which the multiple and 3 of three attach" is a multiple of three the upper and lower, right and left total or a puzzle game that makes to the figure to which three attaches and erases a figure as for figures of the mass eyes.
The peace of the figure that exists below at the position in having the mass eyes in taps is put.
The peace disappears up and down ..that.. and right and left with the put peace if the total of a certain figure is "Figure to which the multiple of three or 3 attaches".
The total and the remainder time of the erased peace are scored.
If the total is not "Figure to which the multiple of three or 3 attaches", the put peace becomes black and remains at the put position.
Moreover, if peace will not be erased in the limit time or less, the peace of "Black figure" is put, and the peace of "Black figure" is not scored.
In addition, two or more peace connected by continuously erasing it up and down and right and left can be erased at the same time, and those peace is scored, too.
It is game over that bury everything by peace by a clear stage and the mass eyes and attach if all peace can be erased if done.