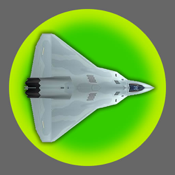 StarBouncer is a fun and frantic 2D space shooter game with a cool, unique feature: your ship bounces off the edge of the screen and center scoreboard. Your mission is to fly around this space arena and destroy drone ships and mines.

For a demo video of the game, check out the StarBouncer support website linked below.

While you can play this game with a defensive strategy, an offensive strategy is more effective, especially at higher levels. Try to destroy drones as early as possible, before they awaken and begin seeking you. Move around the screen, using rebounds off the edges, to sweep through the arena and maneuver into firing position. You're better off being in motion than sitting in any one position for more than a few seconds.

StarBouncer has unlimited levels, but difficulty increases each level, making it harder and harder to advance.

When using tilt control, tilt or rotate your device side to side to rotate the ship (any combination putting the device at an angle works). You can adjust the tilt sensitivy in settings (the initial setting is a good combination of response and stability). The slider affects the rate and maximum level of tilt control.

When using touchscreen control, you can choose a "displacement" (D) or a "velocity" (V) option. With displacment mode, the ship rotates directly with the motion of your finger on the touch pad, as if you were grabbing the nose of the ship and moving it. With velocity mode, motion of your finger pushes the nose of the ship, giving it rotational velocity. The sensitivity slider will affect the rate and maximum level of touch control.

Controlled taps on the thrust button will accelerate your ship forward, and you can rotate the ship 180 degrees to the direction of motion and fire the thrusters to put on the brakes. To maintain control, use thrust strategically and sparingly.

When firing on mines and drones, aim your ship then fire. Don't try to aim the bullets, which move independently of the ship, as it will cause you to overshoot your target.

Be warned: mines and drones have proximity sensors, and will home in on your ship if you come into close range! You might be able to outrun them, but only for a brief amount of time before they destroy you.