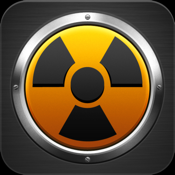 AS SEEN ON SATURDAY NIGHT LIVE AND THE DAILY SHOW!!!

We are celebrating over 10 MILLION fart fans served!!! Join the FART BOOM!!!
Thank you for making Atomic Fart the best fart app in the store! :)

"The best fart machine out so far!"
"The ultimate in mobile farting!"
"Exceptional compared to the other fart apps"
"Most awesome app money can buy!"
"SOOO FUNNY!!"
"Best prank app!"
"The best out there, no joke!"
"Perfect for meetings and business travel"

Atomic Fart is the ultimate Fart Machine, Whoopie Cushion, Fart Timer, Motion Detection Fart, Fart Drumset AND Simon Farts all in one! And its FREE!!!!!!

It is the ultimate fart arsenal in your pocket. With 30 super high quality crystal clear fart sounds, Atomic Fart is the most comprehensive and feature-packed fart machine in the App Store and any mobile device in the planet!

Lots of toots is just the beginning! Switch to TIMED MODE and your iPhone/iPod Touch will rip one out as soon as the timer runs out. Set it to repeat and it will keep blasting each time it runs out.

Turn on MOVEMENT DETECTION and your device will blast your pre-selected atomic blast as soon as it detects the slightest movement! Perfect for hiding it in the couch, chairs, purses, pockets or any place that will cause tons of laughs and/or embarrassment! Set it to repeat and it will start detecting movement again for another blast!

But Atomic Fart is more than that! It has a DRUM MODE! You can now play fart drums, where each drum pad has a distinct gastric sound. It also has a random pad which will play any of the 30 flabbergasting farts!

But why stop there!? We wanted to make the best fart app in the store! So why not add SIMON SAYS MODE! Now you can play Simon Farts on the Fart Drum Pads! The Worlds first and ONLY! Now with 3 speeds too!

Atomic Fart was done entirely with professional graphics and awesome high quality sound! It is the most flatulent iFart, iWhoopie, iToot or whatever uNameIt for the iPhone and iPod Touch!

Now go, have fun and LET IT RIP!

How to say "fart" in other languages:

Let us know how to say "fart" in other languages and we will update this list!

Your comments and suggestions are EXTREMELY important to us! Give us ideas/suggestions and we will do everything we can to make it happen!

TROUBLESHOOTING:
+If you are not getting any sound, try playing around with the physical switch to the left of the iPhone/iPod touch. Also make sure your volume is turned up.