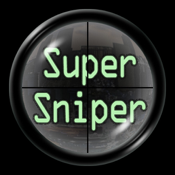 Submit your email address via this app to be entered into the Play&Win system!
Top Scorers on the worldwide leader boards who have joined the Play&Win system will periodically be awarded codes to download from our ever expanding roster of top games and apps!

Terrorists are holding the entire city hostage and it's your job to eradicate them.

You will have a fixed time to neutralize each target before you become the target, and these guys never miss!

Some of the Terrorists will have taken hostages, these guys will require a head shot and ONLY a head shot, otherwise you run the risk of taking out the hostage, and that's an instant Game Over!

Big bonuses are awarded for HEAD SHOTS and a time based BONUS is offered for completing each level quickly.

Now you are competing against Top Snipers all over world, with the new Leaderboard feature that has now been added to the fastest, most exciting Sniper game on the app-store!

The amazing new Leaderboard feature keeps Leaderboards for every level of difficulty AND for the Touch and Tilt modes. So everyone can compete at their own level.

Smart Zoom Technology: which allows you to pick out your targets without pressing a seperate button to zoom. The scope zoom is incredibly smooth, and provides incredible detail of your targets.

Full City Maps: Unlike some of the other Sniper games on offer, Super Sniper offers full scrolling of the city whether you are zoomed in OR out. No more "single screen" levels with Super Sniper!

Tilt AND Touch Controls: After listening to the Super Sniper community we now offer Tilt AND Touch controls. We also offer full control over the Horizontal and Vertical axis movement from the options menu.

Pulse Pounding Music and Sound Effects:
From the haunting main menu music to the "24" style rocking in game soundtrack, Super Sniper takes the Sniping genre to a whole new level.

AI "Spotter" : Super Sniper is the only game to feature an incredibly useful "Spotter" who will call out the positions of your targets using radio headset voice over.