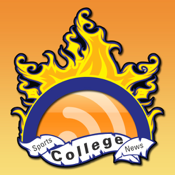 Who just signed the top recruit in mens college basketball? Who won the women's field hockey championship last night? Who is the top ranked mens volleyball team in the nation? Now the answer to all of these questions and more are now just a screen tap away.

CSN is the ultimate experience in college sports news. Get the latest updates on your favorite college sports and teams. This sports application will give you real-time access to all college sports news from various news networks. Football, basketball, baseball, hockey, golf, tennis, you name it and you can gain access to them through one easy navigation system within College Sports News.

Bonus to College Sports News:
- Integrated Web browser lets you visit the linked Web page without leaving the application
- Pulls data from various RSS feeds so that you get access to all the information in one place

This app requires a 3G, EDGE or Wifi connection to read the news feeds.