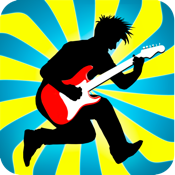 🎸 The electric guitar used on Atomic Tom's viral music video: http://bit.ly/iShredAtomic 🎸
No other iPhone guitar comes even close.
"High end technology for peanuts. Don't know how they do it. Stellar guitar app." - jjw14 ★★★★★

"Of all the guitar apps available on the App Store, Frontier Design’s iShred is my favorite." - MacWorld

"By the first strum, you realize that iShred is a virtual guitar like no other - it is in fact the tool for ultimate guitar supremacy on an MP4 player scale." - TouchMyApps

iShred starts with a set of high-fidelity guitar samples, then feeds them through eight exciting effects pedals and an overdriven amp simulator. Whether you want a clean trebly surf sound, a spacey rock lead, or an all-out metal assault, iShred delivers the goods. The sonic line-up includes these virtual stomp-boxes:

iShred provides a playing interface that's both powerful and easy to learn. Create your songs from a huge library of over 2000 built-in chords, scales, and fret positions, by assigning them to the two rows of buttons at the top of the screen. The buttons give you immediate access to all the chords and scales you need for a song, and let you easily switch between strumming chords and playing melodies.

RECORDING
✓ Record performances with optional metronome
✓ Play along with recordings, even use different sound
✓ Speed up or slow down performance after recording

AIRPLAY
✓ A jukebox of shared songs from around the world
✓ Share your performances and be rated by other guitarists
✓ Download songs and performances from other players
✓ Check out the AirPlay charts: http://fdgm.us/AirPlay

SONGS & PLAYLISTS
✓ Combinations of chords & scales can be saved as songs
✓ Songs can now have multiple pages of buttons
✓ Add FX buttons to switch effect setups on the fly!
✓ Songs can be edited, renamed, deleted
✓ Backup songs to the network