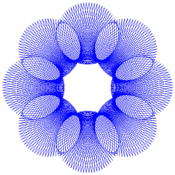 Amaze your friends by demonstrating your knowledge of the Hypotrochoid curve.

Artwork based on Hypotrochoid curves first became popular from the late 1960's onwards with the release of Spirograph®.

A Spirograph® set consists of a number of plastic gears and other shapes such as rings and straight bars. A pen placed through one of the holes in a gear piece will trace a curve as it moves against, and is constrained by, one of the other shapes.

One set of curves that can be produced using Spirograph® are known as Hypotrochoids.

TROCs is a program that will generate a hypotrochoid, or Spirograph®, curve.

These are curves created by tracing a point attached to a circle, at a specified distance from its center. The circle rolls around the inside of another circle which is fixed. Combining the radius of the 2 circles, and the position of the point, produces a curve which is often complex but aesthetically pleasing.

You can forget about the complexities of the Mathematics involved and concentrate on producing the curves and patterns by simply adjusting the values which control the appearance and shape of the final curve. Alternatively, use the random feature to generate a curve from one of more than 3 billion choices provided by this program.