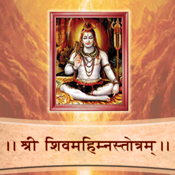 HYMN ON THE GREATNESS OF SIVA

The Shiva Mahimna Stotra is very popular among the devotees of Lord Shiva and is considered one of the best among all Stotras (or Stutis) offered to Lord Shiva . The legend about the circumstances leading to the composition of this Stotra is as follows.

A king named Chitraratha had constructed a nice garden . There were beautiful flowers in this garden . These flowers were used every day by the king in worshipping Lord Shiva.

One day a Gandharva (Singer in the court of Indra, the Lord of the Heaven) named Pushhpadanta being fascinated by the beautiful flowers, began to steal them, as a consequence of which king Chitraratha could not offer flowers to Lord Shiva . He tried very hard to capture the thief, but in vain, because the Gandharvas have divine power to remain invisible.

The thief Pushhpadanta, not knowing this, walked on the Shiva Nirmaalya, and by that he incurred the wrath of Lord Shiva and lost the divine power of invisibility . He then designed a prayer to Lord Shiva for forgiveness. In this prayer he sung the greatness of the Lord.

The legend has some basis since the name of the author is mentioned in verse number 38 of the stotraM . The recital of this stotra is very beneficial, and Shri Ramakrishna, one of the famous saints of the nineteenth century, went into samadhi just by reciting a few verses from this hymn.