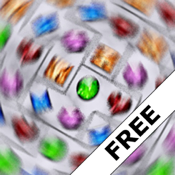 This is the free version of Gem Spinner. Search for "Gem Spinner" on the App Store to find the very reasonably priced full version with many more boards and skill levels.

Gem Spinner was chosen by Apple for the iTunes "What's Hot" list!

Now you can play Gem Spinner on Facebook also. Check it out!

"Goodness we thought Bejewelled was the best! Wrong- Gem Spinner IS :O) - I fought to get my 'phone after downloading Bejewelled. After loading GEM SPINNER, my phone is gone before I awake. I have to use the landline to make phone calls now.:O)) Get this- you won't be disappointed. Keeps you on your toes. Enjoy." -- Sunihugz

"Now this really IS unique... - I haven't run into anything else like this...it's my favorite game, and I've tried close to 50 of them. Nice job!" -- ExcelGeek

"Great game - Great take on bejeweled, so much more engaging. Well worth the money." -- TechnoGirrl

"Best.Game.Ever. - If you're a match-3 fan, BUY THIS GAME. It's the most fun, intriguing, addicting game I've ever played. I play it every day without fail and never get bored or tired of it. I wish they would add more levels and also release a PC version of this game!! I love it!!" -- ck428

"[Gem Spinner] completely changes the whole dynamic of the match-3 formula, and in a good way that doesn’t come off as an attempt to be different just for the sake of being different. Real thought was put into the design of this game, both functionally and aesthetically, and it shows. There’s a genuinely entertaining game here with lasting appeal that brings some unexpected twists to the table — literally and figuratively — and adds a savoury dash of logical thinking to this otherwise staid puzzle formula." -- frapstr.com

Gem Spinner is match-3 like you’ve never played before! It’s based on the popular gem-swapping game play of Bejeweled, but adds some great twists – some like Tetris, some brand new – that make it much more engaging and thought provoking, but still easy to learn and play.

Gems are arranged inside of pieces of different shapes and sizes. Swap adjacent gems to match three in a row. Double-tap a gem to spin its piece 180 degrees. Match all the gems in a piece to clear the piece from the board. Drag pieces to empty board spaces to create more match opportunities. Match enough spaces to complete the level goal and then continue to swap, spin, and drag to try to clear the entire board.

•16 unique boards which can be played at skill level 1. Full version offers 35 boards and a variety of skill levels.
•Great graphics and sound effects.
•Optimized for minimal battery drain
•Animated, narrated instructions explain all aspects of game play.
•Practice mode available with hints on every move.
•Easy to learn, easy to play, hard to master.