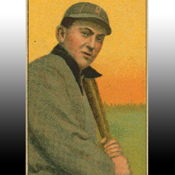 Tyrus Raymond "Ty" Cobb (December 18, 1886 – July 17, 1961), nicknamed "The Georgia Peach," was a baseball player and is regarded by historians and journalists as the best player of the dead-ball era and as one of the greatest players of all time. Cobb also received the most votes of any player on the 1936 inaugural Hall of Fame Ballot. receiving 222 out of a possible 226 votes.

About The Card:
Ty Cobb's legacy also includes legions of collectors of his early tobacco card issues as well as game used memorabilia and autographs. Perhaps the most curious item remains the 1909 Ty Cobb with Ty Cobb Cigarettes pack, leaving some to believe Cobb either had or attempted to have his own brand of cigarettes. Very little about the card is known other than its similarity to the 1909 T206 Red Portrait card published by the American Tobacco Company, and until 2005 only a handful were known to exist. That year, a sizable cache of the cards was brought to auction by the family of a Royston, Georgia man who had stored them in a book for almost 100 years.

About Tree Frog
Tree Frog Reader was created with the end reader in mind. Tree Frog lets you easily navigate through your book with books being organized into Chapters and Pages.

About PublisherApp
PublisherApp creator of the Tree Frog Reader, PublisherApp is software development team located in Southern Utah. Our technology includes our proprietary Publishing Platform and Tree Frog Reader which is dedicated to making it easier for Experts, Coaches, Professionals,Authors and Publishers to share their great content in a digital format!
For more information visit:
www.publisherapp.com