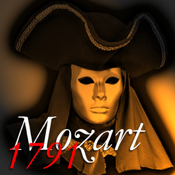 Wolfgang Amadeus Mozart was born in Salzburg on January the 27th 1756 and died in Wien on December the 5th 1791.
He was one of the greatest musicians of all the times. In 1791, the year of his death, he composed the Requiem, perhaps his most famous work.
This game is based on the perceptive auditory ability and
on visual memory. If you will solve the 4 levels of the game you will be able to listen to the whole Requiem and to read some of the most important letters written by Mozart that will allow you to understand his character and life. You will find 14 short musical fragments, doubled and randomly combined; the game consists in the identification of the couples of sounds. When you find them they will desappear from the screen. The level will be over when all the sounds will be eliminated. Then you will be able to play the next level of difficulty but in the same time some movements of the Requiem and the first group of letters will become available. If you solve the 4 levels of the game you will access to the 14 movements of Requiem and the 4 groups of letters.