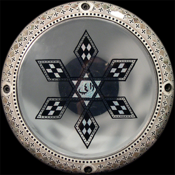 The darbuka is a goblet shaped hand drum used mostly in Turkish, Arabic, Assyrian, Persian, Balkan, Greek, Armenian and Azeri music. Goblet drums have many names according to location and language. Darbuka is the the Turkish name.

This application has 8 darbuka sound effects consisting of a mix of "doum" and "tek" sounds.

You can play your iPod music in the background while using this application and accompany the song.

For best sound quality, connect your iPhone/iPod Touch to external speakers or headphones.