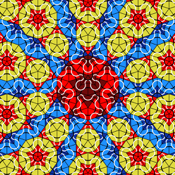 Tilework is a an implementation of Penrose Tiles for the iPhone.

Shake the phone for options. For instance to turn sound off.

A Penrose tiling is a nonperiodic tiling generated by an aperiodic set of prototiles named after Roger Penrose, who investigated these sets in the 1970s. Because all tilings obtained with the Penrose tiles are non-periodic, Penrose tilings are considered aperiodic tilings. Among the infinitely many possible tilings there are two that possess both mirror symmetry and fivefold rotational symmetry.

A Penrose tiling has many remarkable properties, most notably:

- It is nonperiodic, which means that it lacks any translational symmetry. More informally, a shifted copy will never match the original exactly.
- Any finite region in a tiling appears infinitely many times in that tiling and, in fact, in any other tiling. This property would be trivially true of a tiling with translational symmetry but is non-trivial when applied to the non-periodic Penrose tilings.
- It is a quasicrystal: implemented as a physical structure a Penrose tiling will produce Bragg diffraction; the diffractogram reveals both the underlying fivefold symmetry and the long range order. This order reflects the fact that the tilings are organized, not through translational symmetry, but rather through a process sometimes called "deflation" or "inflation."

The aesthetic value of unusual tilings has always been appreciated and remains an abiding source of interest in them. The formal defining properties of Penrose tilings are typically disregarded when used in art, as only the visual similarity is noted. The similarity with some decorative patterns used in the Middle East has been frequently observed and in a paper by Lu and Steinhardt offered evidence that a Penrose tiling underlies some examples of medieval Islamic art.