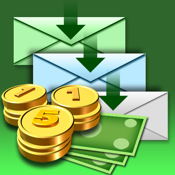 Budget Touch uses the envelope model of budgeting. Set aside money for your standard expenses, then know how much you have left to enjoy.

Enter your expenses, and view your account and envelope balances while on the go. You can also get reports, see graphs, list your transactions, and much more.

Budget Touch can be used stand alone or synced with the desktop version of Budget (Mac or Windows) via WiFi. When used together Budget and Budget Touch are an unbeatable combination to help you manage your money, stay out of debt, and save for the fun things in life.

Features:
- Beautiful and fluid interface on iPad takes full advantage of the large screen.
- Password protected with strong AES-128 encryption of your data.

- Get graphs and reports for expenses, deposits, budgets, and many more.
- Export your data via email in either tab-separated, QIF or OFX format.
- Export reports in HTML format.
- Print reports on iOS 4.2 or later.

Pay Source System (Paid Add On)
- Define your income and have Budget Touch calculate how much to put towards each envelope.
- Automatically distribute your income to your envelopes.

Recurring Transactions (Paid Add On)
- Schedule future transactions and be reminded when they are due.
- App icon is badged to show the number of due or overdue transactions. On iOS 4 and later, the badge is updated even when Budget Touch is not running.

If youre into budgeting and want to save some dollars to pay off whatever or for that special gift for someone you treasure then as long as you remain disciplined no mental n...