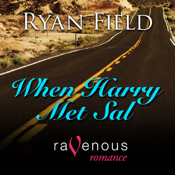 When Harry Beckham's best friend asks him to drive her new, casual boyfriend, Sal Sorentino, from California to New York, Harry never expected they'd wind up as lovers their first night on the road. Harry just assumes that Sal is straight, and Harry already has a boyfriend of his own back in San Francisco.

But when Sal explains that he's bisexual and that he's extremely attracted to Harry, everything changes. Harry tries to resist the mutual attraction, but all it takes is one simple kiss and they both wind up having the best sex of their lives on a cross country road trip.

When they reach New York, they agree to go their separate ways and forget about each other. Harry becomes a well known designer who does national talk shows, and Sal becomes a professional poker player who lives in a mansion and owns a pet pig named Dolly. And by the time they meet up again seven years later, their lives have changed completely.

But that doesn't stop the passionate physical connection between them from surfacing again. Though all the odds seem to be against them, their physical relationship evolves into mutual love and respect. And this unyielding love they feel for each other turns out to be stronger than anything they could have imagined.