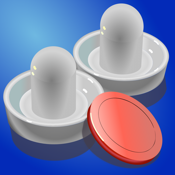 FlairHockey sets a new standard - several of them, actually - for air hockey fun.

"The game of air hockey will simply never be the same again." - iPhone Life Magazine

FlairHockey easily preserves air hockey’s classic game appeal, and exponentially cranks up the fun, with three unique tables, five kinds of paddles and six kinds of pucks that you can explore.

Of course FlairHockey includes everything you’d expect in a leading air hockey app for the iPad. Set it for self or opponent play and pick a skill level, then immerse yourself in killer sounds and cutthroat competition.

But what sets FlairHockey apart from every other air hockey app are all the things that, until now, you didn’t know you were missing. Like visual interest. Incredible variety. And virtually unlimited fun.

YOUR TABLES ARE READY
One download, three tables. Don’t be surprised if they’re all your favorite:

- Arcade: Do you like the classic? Here you go.
- Painter: Feeling creative? As the puck crisscrosses the screen, the Painter table fills with splashes of colorful trails. You could be the next Jackson Pollack.
- Marbles: Battling over a puck is fun. Slapping at 11 marbles released all at once is just beyond.

Bonus! Download Graph Paper for free. This table hosts the action on hand-drawn graph paper; the puck lays down pencil lines as it careens about.

CHOOSE YOUR WEAPONS
Standard paddles are… nice. But wouldn’t it sometimes be more fun to play an opponent whose paddle was invisible? Or to play with paddles that could whack a puck extra hard? Round out your armament with Supersmall paddles, for greater challenge, and Supersized paddles, for younger or less adept players.

If you really like to be challenged, choose the Smart level and go mano a mano with the computer. The better you do, the faster it becomes.

GET THE GAME THAT GROWS WITH YOU
Pick up another three tables, below, purchased separately. More tables are on the way.

- Duet: Double your fun! Duet puts two pucks in play and creates mini drum solos whenever a puck makes contact with a paddle, wall, or other puck.
- Garden: Similar to the Painter table, except the pucks leave multi-colored trails of different flowers.
- Cosmic: Planets as pucks, spacey sound effects, and more.