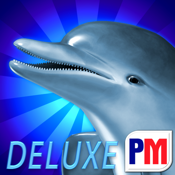 With three different free games features and the crabby Crab Jackpot, there's nothing fishy about this game...

During normal play the Dolphin is wild and substitutes for all symbols except scattered clams.

3 or more clams triggers the Tentacle Treasure Feature. The Octopus holds 6 features in her mighty tentacles. Roll the dice and a feature is chosen!

Never seen a dolphin in a tuxedo? You have now, and he is wild and triples your wins! You'll be swimming in cash! The Wild Dolphin Feature awards 20 free games with all wins tripled.

Every 5 free games played one additional Wildcard Dolphin is added to each reels AND the lowest paying symbol is removed from the reels. A maximum of 5 Tuxedo Dolphins per reel can be awarded. Once all 9, 10, J, Q, K, A symbols have been removed from the reels no further symbols are removed.

The Octopus can award the crab jackpot - and you can also win it during free games when 3 gold crab symbols appear.

This game is for entertainment purposes only. No real money can be won or lost.