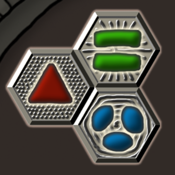 Castle Tiles is a fast-paced action-puzzle game for 1 to 4 players — created from the ground up to take advantage of the iPad’s features! View the demo video on the MachWerx Web Site!

Collect tiles in matching groups to attack your opponents’ castles. Three tiles form a match if they are all the same or all different in each of four categories: color, shape, number, and background.

Battle between up to four people or AI opponents simultaneously on one iPad!


At the beginning, try to make matches with different shapes to build up your army. Then, start launching attacks with all three colors to send out your huge army!