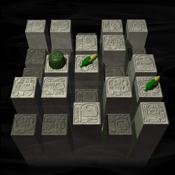 After a hectic day at work or school, what's better than to take a few minutes on the couch in your den and play a few rounds of Ammoin. The game is suitable for all ages, so you'll probably be hard at competing with your kids for both the best ranking and the iPad before long.

Ammoin HD is a simple, casual and highly addictive puzzle solving game custom crafted for the iPad.
The gameplay is familiar from the iPhone/iPod touch version already available on the App Store, but the glorious large screen of the iPad makes the well thought out graphics and usability to a new level. Dont' let the relatively simple looks deceive you, once you get into it, you'll keep trying to break your own and other peoples' records.

The goal is to collect all the valuables on the board by moving a pawn according to some simple movement rules. The name Ammoin is a finnish word that translates to 'in ancient times', hence the nature of the available themes.
The play area (board) consists of a 5x5 grid of squares. At the beginning of each level a set of valuables is placed randomly on the board along with the pawn. The player moves the pawn by tapping on the square he wants to jump to. The pawn can jump over two squares horizontally or vertically and over one square diagonally. A square can only be visited once during a level.