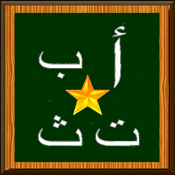 **** Description of ARABICBRAIN*****
* 2 games at the price of one and its limited time only.
* More games will be added soon.

** Memorize the alphabets, numbers and their positions. Tap the numbers after covered by stars in ascending order**

Its so simple to understand, just need to think before play...

ArabicBrain is a game of Arabic alphabets and numbers which appears on the screen randomly and disappear in few seconds with a star appear on the top of each alphabet. This is a memory related game and you need to memorize all the Arabic Alphabets.

The order of Arabic numbers are
٠.١.٢.٣.٤.٥.٦.٧.٨.٩

This game consist of 25 levels as you go each level the difficulty to memorize Arabic Alphabet increased.