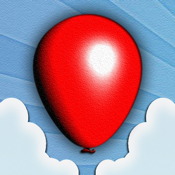 *Our latest and greatest iPhone and iPad game is out now! Download Holiday Match today!*

Don’t let the balloons get away! Pop as many as you can within the time limit!

Balloonz! is an addicting arcade game for all ages. The concept is simply to pop as many of the colorful balloons as you can to achieve the highest score! Play either in hard or easy. Play Easy and drag your finger across the screen to pop the balloons. Play Hard and you have to be a little more precise to pop the balloons!

To pop the balloons, simply just tap on the screen at the location of each colored balloon to score points. Avoid the black balloons because they deduct points. You'll receive 10 points for each colored balloon. Get a high score and get prompted to post it online and show off your achievement to the world.

There are four power-ups; STARS will increase the amount of balloons to pop (Means More Points!), BOMBS will wipe out every balloon but give you half the points for each balloon (Hit A Bomb After A Star To Get A Big Jump In Points!), TIME-CLOCK adds 10 seconds to your game (More Game Time Means More Points!), and SKULLS generates black balloons. (Careful Not To Get The SKULLS!)

Balloonz! consists of 3D balloon models, and real time lighting for the 3GS and 3rd generation IPod. The balloons are controlled by real-time physics and mimic real life balloons floating through the air.

- Real-Time Physics
- Global Online Score using OpenFeint with leaderboards for Easy and Hard game modes and with achievements throughout play
- 3D Balloon Models
- Lighting and Shadow effects (Reflections on the balloons for 3GS phones)
- Addicting Gamplay
- 4 Power-Ups randomly generated to help or sabotage your game
- Easy and Hard game modes where easy lets you drag your finger across the screen and hard forces you to be more precise with your taps
- 6 Colorful Balloons - Red, Green, Blue, Purple, Yellow and Black