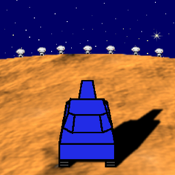 Defend bodying from the attack of the alien!

This is a shooting game.
If ten enemy tanks are destroyed, it becomes victory.it is noted to receive the hard attack when becoming timeout!
When it touches either of enemy, the airframe damages seriously.

There are three kinds of enemies as follows.
The alien: It defeats by the attack.(10 points)
The enemy tank: It defeats when keeping attacking.(100 points)
Missile: It is not possible to defeat.


Operation when playing uses button and ball that appears under the screen.
shot button
The beam is shot while it is pushing.

Movement ball & field
My tank moves to the extent that the ball is moved from  the center.

Because the beginning stage and the life can be set in the option, it is possible to play from the beginner to the expert comfortably.
There is a score ranking, too.