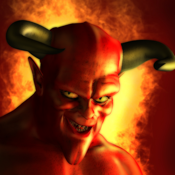 Underworlds, named by Touch Arcade as a MUST HAVE iPhone game is now available on the iPad with a new ULTIMATE EDITION!

Game of the Month - AppGamer.net

"it occupied almost all my free time from the minute I downloaded it." - MacWorld, 4 of 5 star review.

"Underworlds is a game that will loot your heart and have you coming back for more...Underworlds is an absolute blast!" - thatvideogameblog.com review

"I give Underworlds a strong recommendation to any hack and slash fan. I’ve had a great time playing through it, and I’m still having fun on my second time around." - TouchArcade.com

"The game is dark, atmospheric, intense, and it’s a fine debut" - 9 out of 10 review, AppGamer.net

"I’ve been waiting for an action RPG in the same vein as Diablo on this platform for months and now it’s finally here." - iphones.com

"It is really an amazing update- probably the greatest single update of any app I have ever seen." - Jebus (Touch Arcade Fourms)

"This is the first Authentic iPhone Role Playing Game!!" - appBank.net

Chapter 1: Into the Abyss
You are the guard of McTavish's traveling caravan, carving out a comfortable existence by taking odd jobs and protecting against the occasional Orc raider when a mysterious attack on the nearby town of Albrect compels you to lend your blade to the good townspeople.


It's not just rats that plague the Happy Cadaver Inn. Denizens of hell are seeping through to the world of mortals! During your journey you'll face a horde of gruesome enemies...and their wicked overlords!

Chapter 2: The Giant Fortress
Discover the hidden secrets of the sprawling town of Termon.

Face new and fierce enemies in your quest to lift the curse that plaques the 'old town' residents.

The fortunes of many are in your hands!

More about Gameplay
The experience you gain during your adventure lets you learn powerful offensive feats like Slash, Shield Bash, and Berserk or advance in the healing arts to gain Health and Vitality Boosts. As you increase in level, you can upgrade your existing Feats or add new ones. The active combat feats feature graphically stunning on-screen special effects to help make your battles even more heart-pounding and exhilarating.

As you progress you can choose exactly how to improve your character's abilities. Hone your strength to become a real bruiser, become nimble and accurate by focusing on dexterity, increase intelligence to unlock more feats, or work on your constitution to better withstand the onslaught of the undead.

Features:
• Takes FULL advantage of the power of the iPad!
• Fully configurable controls, move all on screen controls where you like them! Use a virtual direction pad or just touch where you want to go
• Customize your character's attributes and feats to suit your play-style
• Advance your character's abilities while you explore mysterious graveyards, dark chambers and dangerous crypts
• Test your skill on 4 difficulty settings, including the extreme difficulty challenge
• Find thousands of unique armor and weapons to use or trade for gold
• Discover hidden traps and treasures
• Choose from two simple, smooth control schemes to make play easy at home or on the go!
• Save your progress at any time or restart with your current experience and items
• Enjoy Underworlds again and again - play through multiple times, on different skills levels